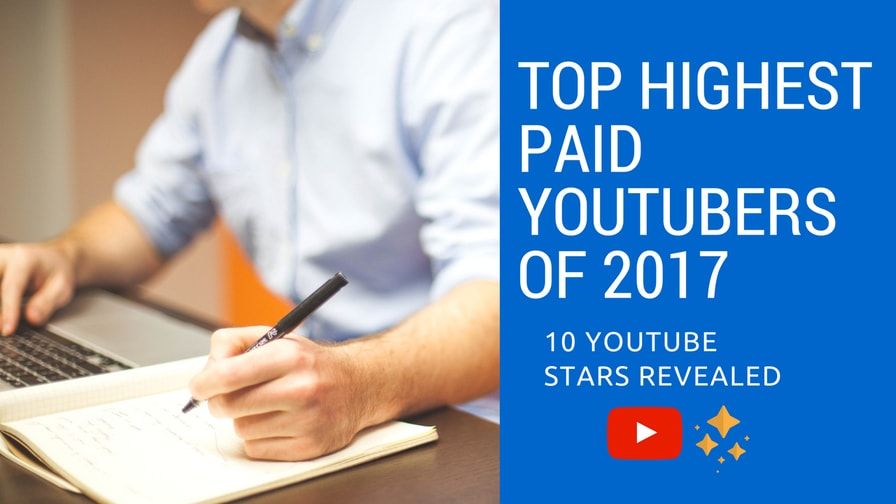 People of all ages are using YouTube daily to watch entertaining videos or to learn something new.

With the many famous YouTube starts and their popular channels, people often wonder:

Who are the highest paid Youtubers?

And How much are they earning?

Forbes Magazine has done a great job answering the last two questions by publishing a list of the highest paid YouTube Stars with verified earnings since 2015.

The least amount each YouTube star earned in 2017 was not less than $10M.

Looking at the single earning for each Youtuber and the combined earnings of the top 10 YouTube stars double in just two years show us the great potential of making money on YouTube.

These numbers are not an expectation or based on speculation. As per Forbes those are verified & reported earnings based on YouTube analytics and Forbes interviews with channel agents and producers.

The main question which Forbes didn’t clearly answer is how these YouTube Stars make money on YouTube? How do they get money out of their channel?

Below is the main 3 ways YouTube stars and any channel own can monetize their channel:

This is the most obvious way to make money on YouTube, the platform owned by Google display ads on videos and Google shares a percentage of the revenue to channel owner based on cost per impression CPM.

CPM is calculated for every 1000 views that your videos get, and in order for ads to display on your videos, you must join YouTube partner program.

Since January 2018 Google announced that for a channel to qualify for video monetization through YouTube partner program they will need a minimum of 4,000 watch hours and 1,000 Subscribers in the past 12 months.

If your channel drops the 4,000 watch hours after being qualified, YouTube will not stop ads on your videos unless your YouTube channel is inactive for 6 months.

YouTube average cost per impression CPM depends on many factors including the below:

CPM can vary from channel to another and can vary in time for the same channel. It is possible to know your exact CPM for your channel by checking your YouTube analytics tool.

It’s expected that CPM average at $1.8 per 1000 views. A YouTube channel that has 1M monthly views is expected to earn $1,800 per month on average.

If you know the monthly views of any of the YouTube starts channels, it will become very easy to expect what they are earning.

For Example, if a channel is receiving 200M monthly views, assuming a $2 CPM, The Channel will be earning $400K per month.

As the YouTube channel grows and becomes more popular, brands and advertisers will reach out to YouTube stars directly to over them a sponsorship deal.

The real money is not in YouTube ads, the real money comes from sponsorship deals; as brands will often pay you a higher cost per 1000 views than they are paying Google. The best part is that you will keep the full amount to yourself vs getting a share of the earnings from Google.

A good example of Youtubers who monetize their channel through sponsored deals is Felix Kjellberg owner of PewDiePie channel.

Another important way to monetize your channel is to promote brands products or to sell your own products. A good example of Youtubers who use this method is Dude Perfect.

They started an online store to sell all kind of branded products like caps, t-shirts, socks and many others.

There are many ways to create or shoot your video before uploading it to YouTube, the most famous ways are below:

The youngest population have found a new way of discovering and learning information other than reading blog posts like old guys like us. Today they head to YouTube to learn about new things they are interested in.

What Does that mean for you as a blogger? It means that YouTube is not only a money-making machine but it is also a traffic mine for those who are looking for massive traffic and increased brand awareness.

Don’t forget to publish your video to YouTube and to include it in your post at the same time.

This interesting list includes 4 Professional Gamers, 2 Brothers, and a Kid! Can you believe it?

Dan Middleton is a professional gamer. In his channel DanTDM, he presents and plays popular video games.

This channel currently has 12.9B combined views and an average of 6.4M daily views. This channel is making roughly $345.6K per monthly from YouTube ads.

Evan Fong is another professional gamer. In his channel VanossGaming, he presents and plays popular video games.

With nearly 23M subscribers and 800+ videos, he came second on Forbes list with a total of $15.5M. His top viewed video has over 44M views.

This channel currently has 9.4B combined views and an average of 4.3M daily views. This channel is making roughly $232.2K per monthly from YouTube ads.

Dude Perfect is a group of 5 amazing guys and a panda shooting amazing trick shots videos.

With nearly 31M subscribers and near 200+ videos, they came third on Forbes list with a total of $14M. Their top viewed video has over 147M views

This channel has currently 5.4B combined views and an average of 6.5M daily views. This channel is making roughly $351K per monthly from YouTube ads.

Mark Edward Fischbach is another professional gamer but with a comedian style.

His top viewed video has over 67M views.

This channel currently has 9.5B combined views and an average of 4.7M daily views. This channel is making roughly $235.8K per monthly from YouTube ads.

This channel currently has 3.7B combined views and an average of 2.4M daily views. This channel is making roughly $129.6K per monthly from YouTube ads.

His channel PewDiePie has over 63M subscribers and 3,500+ videos, he came six on Forbes list this year with a total of $12M. His top viewed video has over 82M views.

According to Forbes, he dropped to sixth place this year because some sponsors dropped his sponsorship deals because of racism in one of his videos.

This channel currently has 18B combined views and an average of 7.7M daily views. This channel is making roughly $415.8K per monthly from YouTube ads.

With over 15M subscribers and over 650 videos, he came seventh on Forbes list with a total of $11.5M. His top viewed video has over 197M views.

This channel currently has 4.4B combined views. Average daily views is not available.

A 6 Years old kid with the help of his parents, he reviews toys on his channel. He does influence the toy industry and his viral videos can increase toys sales. His full name and location are not disclosed by his family.

With over 14M subscribers and over 1,000 videos, he came eighth on Forbes list with a total of $11M.

His top viewed video has over 1.3B views, making it the 59th of the most viewed videos on YouTube of all time.

You will be surprised to know that most of the videos making it on the list of top 100 most viewed videos on YouTube are mostly songs. So this kid is doing a wonderful job, influencing toys sales and making sure he will never have to work a day job ever!

This channel currently has 22.2B combined views and an average of 20.9M daily views. This channel is making roughly $1.13M per monthly from YouTube ads.

This channel currently has 7.3B combined views and an average of 2.6M daily views. This channel is making roughly $140.4K per monthly from YouTube ads.

Lilly Singh or as known by her YouTube channel the superwoman.

This channel currently has 2.6B combined views and an average of 1.4M daily views. This channel is making roughly $75.6K per monthly from YouTube ads.

The Roughly earnings are calculated based on YouTube statistics for current average daily views and the assumption of CPM cost of $1.8 per 1000 view. These are our own calculation to estimate YouTube ads earning and not being verified by Forbes. Forbes verified earnings include earnings reported using all monetization methods including YouTube ads, sponsorship deals and promoting or selling own products.

I know that not everyone is destined to become a YouTube star and make millions of dollars yearly. However, YouTube opens doors for you to seek more fame, traffic, and probably more money.

If you have an idea for a great YouTube channel then it is now the best time to join YouTube and start your own channel. If you are a blogger then it really worth to spend some time to integrate YouTube into your daily content marketing plan.